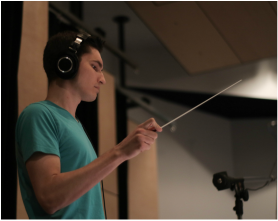 A Los Angeles-based composer, orchestrator, conductor, and educator, Thomas has earned a reputation as a fast, reliable musician. He is well-versed in writing in orchestral, jazz, and popular music for film, television, video games, and the concert stage with scores ranging across the entire dramatic spectrum.

Thomas served as the arranger and orchestrator for the full-length stage musical Way Back When. His film credits include independent films HeartFelt, Return of the Dragon Sword,  A Sense of Sound, and Disregarded, as well as the award-winning documentary GeoFORCE: A Journey to Understanding, and the mobile game Harpoon Lagoon. He also provides original music for the Teen Dance Challenge and other concert dance events, and is a member of the Materia Collective, a conglomerate of musicians who create professional covers of video game music. He has received commissions for concert music by the American Festival Pops Orchestra, Brigham Young University–Idaho concert band, Jazz 4 Justice, and the LDS Church. He has produced three concerts of his original music, including Emerge & Ascend, a benefit concert that raised $1,500. He has also acted as conductor in a number of studio recording sessions.

An active educator, Thomas instructs students of all ages in piano, woodwinds, trumpet, music theory, and composition. He has led multiple after-school classes and private lessons (both online and in-person) for instrumentalists as an official teacher for Piano Keys 4 Kids, MusIQ Club, Music Teachers Network, and Music Lessons on Wheels. He has received praise over his varied and individual approaches to teaching that equip students with a wide range of skills from improvisation to sight-reading.